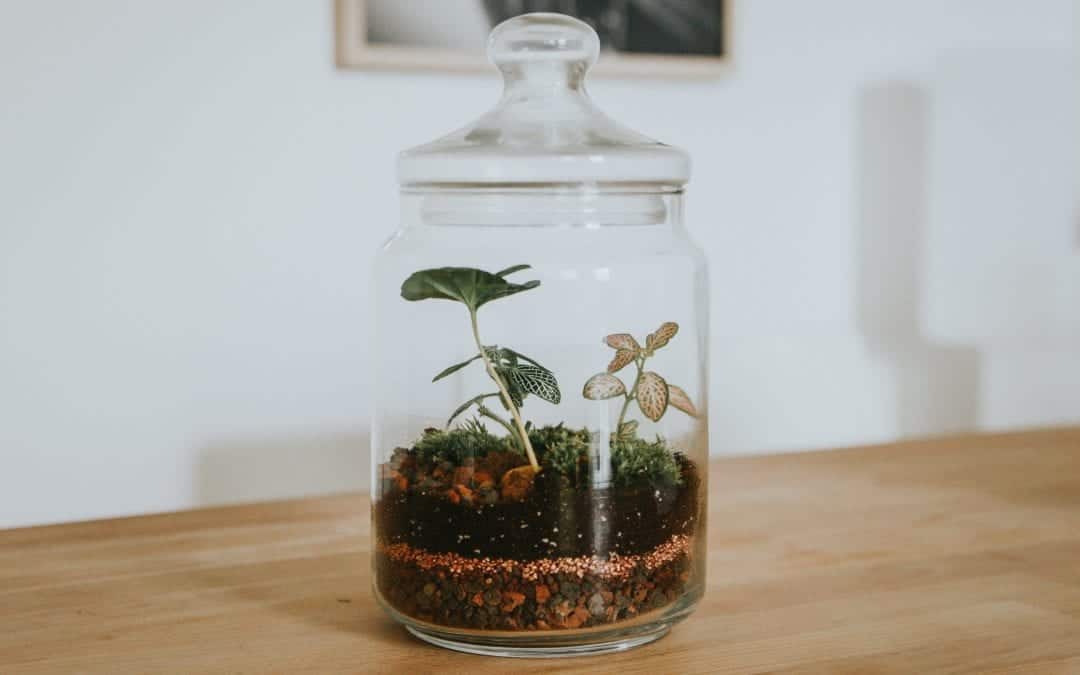 Ultimately, the success or failure of your terrarium is mostly determined by the substrate you build it with. Soil is literally and figuratively the foundation of an ecosystem, and that remains true in your jar.

But before we dive into terrarium substrate recommendations and how-to’s, lets define some terms and clear up some misconceptions so we’re all on the same page.

What is Terrarium Substrate?

You can buy premade terrarium substrate or make your own, but there’s a few qualities you should consider when choosing one:

What is Bioactive Substrate?

Bioactive substrate is just substrate that is intended to accommodate the life cycles of the microfauna and microflora that live in the substrate. It’s ideal to have a robust microbiome with a full range of decomposers, denitrifying bacteria, springtails, various worms, some fungi, and some mosses or algae. The roots of an ecosystem are in the soil (literally), and a healthy soil gives the system resilience.

You don’t have to buy bioactive substrate, you can make it yourself quite easily. Just get a handful of dirt from some healthy soil outside and mix it into whatever storebought soil you already have. You are simply innoculating your sterile, store-bought soil with all of the critters that live outdoors.

A bioactive system is more hardy and resilient than a non-bioactive system, but they also tend to change over time. That may not be desirable if you are building an aesthetic terrarium that you want to stay static, rather than changing over time. For most people, watching the rise and fall of plants and fungi is half the fun of terraria, so bioactive is the way to go.

There is a trend of creating very distinct layers of substrate in terrariums – usually something like: gravel, charcoal, maybe some sand, soil, sphagnum moss, then whatever plants and decorations you might need.

Terrarium substrate layers are not necessary. The order in which you put in different substrates doesn’t matter very much at all (as long as you’re not trying to get plants to root in gravel or charcoal). It also doesn’t matter if they’re neatly separated because they have no real function beyond aesthetics.

It’s true that there is stratification in natural substrate, but it’s on a much bigger scale than we can recreate in our little slice of an ecosystem. The first real world soil layer (though they’re more often called soil horizons) is the O Layer, which stands for organic layer. It’s made up of mostly not-quite decomposed plant matter. It ranges anywhere from 0 inches to 6 inches deep before the second layer (the A Layer, which is called top soil) begins.

Those 6 inches are deeper than most terrariums anyway, and wild plants seem to get along just fine without 4 layers in their root zone.

The Fallacy of Terrarium Drainage Layers and False Bottoms 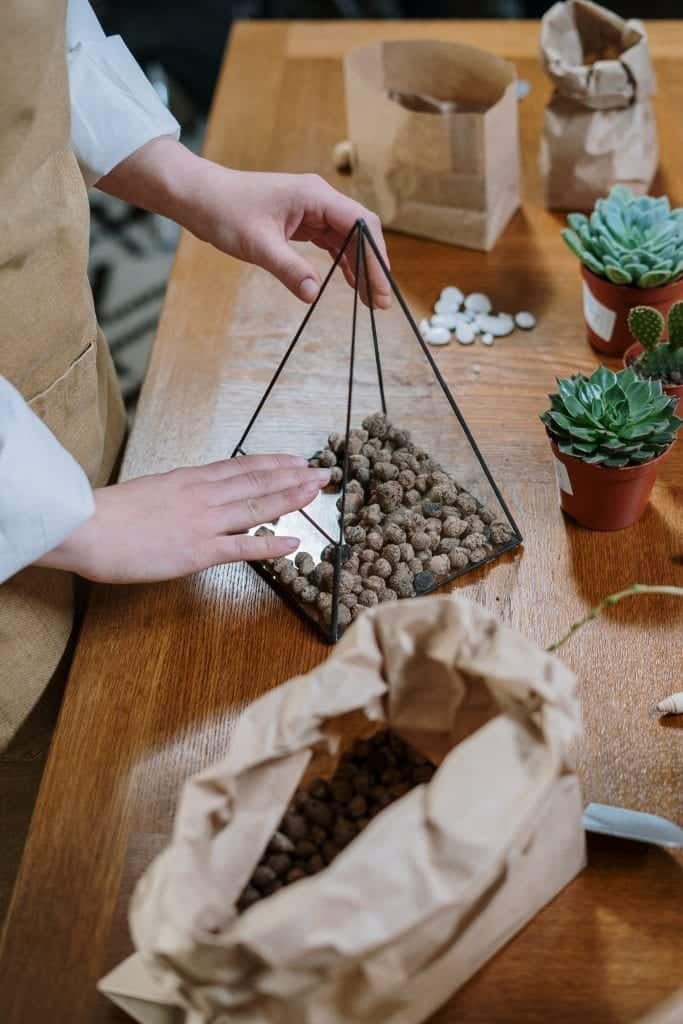 The real reason I caution against layers is because it makes you feel inclined to create a drainage layer. The need to put a layer of rocks at the bottom of every terrarium, jar, and plant pot seems to be deeply ingrained into the human psyche.

I often make enemies with this stance because it’s a piece of strongly-held conventional wisdom passed down through generations. It’s so intuitive that water needs to drain out of the soil and into a layer of rocks. You’ve probably always done it that way and your plants are doing great, thank you very much.

Drainage layers and false bottoms are built with the intent to remove water from the substrate in order to prevent root rot, but they actually do the exact opposite. Because of a phenomenon called the perched water table, water tends to stay inside substrate that has higher surface area (such as small soil particles) and is made up of organic matter (also soil).

Through capillary action, the product of water’s adhesive and cohesive properties, water is able to fight the pull of gravity to some degree. This is how plants draw water from their roots to their leaves. It’s also how water chooses to stay up in the soil instead of that nice layer of gravel you put at the bottom of the pot.

The result of a “drainage layer” or “false bottom” is that you just reduce the effective depth of the container by that much, which isn’t ideal. The ideal scenario would be to have container of infinite depth (like the Earth) so that water can infiltrate all the way down, away from plant roots. For this reason, more substrate depth is always better.

The only time a drainage layer or false bottom is effective is if it actually, you know, drains. Like, out of the terrarium. This is really only possible with a water pump set into the bottom layer, or less frequently, a spigot set on the outside of the terrarium.

When you take a few steps back from the overwhelming impulse to put rocks everywhere, it doesn’t even make logical sense. Assuming the water drains into the rock, now what? It pools there forever until it fills up the container? Or… it very slowly evaporates? Where? Into the bottom-most soil, right next to the fresh roots that are most vulnerable to root rot? And it keeps evaporating, creating a slow-release root rot machine.

Hmm, yeah. Best not make a drainage layer. If you’d like an even more in-depth argument against it, check out this post I wrote on my succulent website (it even has pictures). 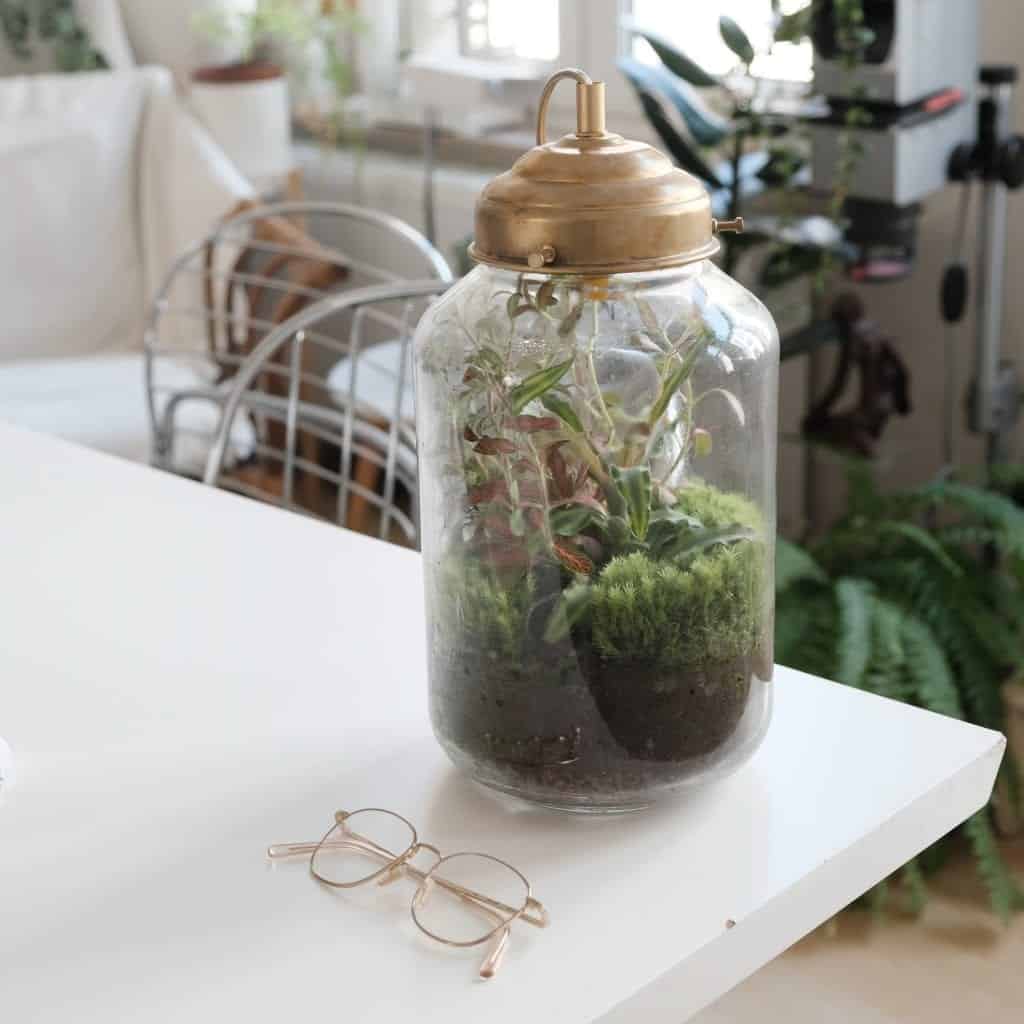 Sealed or closed terrariums have fairly different needs than their open counterparts. As with most things soil, our primary concern is how it interacts with water.

A closed terrarium with ample light will have a limited version of the water cycle. Water will evaporate, condense on the walls of the container, then drip back into the soil. Since there’s nowhere else for the water to go, the container will stay more-or-less the same amount of wet as the day you seal it.

There’s not much need to add water retaining ingredients to the substrate in this case – it will be wet 100% of the time. Sealed terrariums typically require plants that can tolerate constant root inundation, like Pothos, but you can slightly expand your selection of appropriate plants by increasing airflow through the soil.

Using inorganic materials with large particle sizes, such as perlite, will keep the soil from getting too soupy and should allow a degree of airflow.

Open terrariums are amenable to a much wider range of substrate qualities because you can always adjust your watering to address any issues. If you want to take a more hands-off approach, you might increase the water retention of your substrate with coconut coir or similar so that you can water less often. 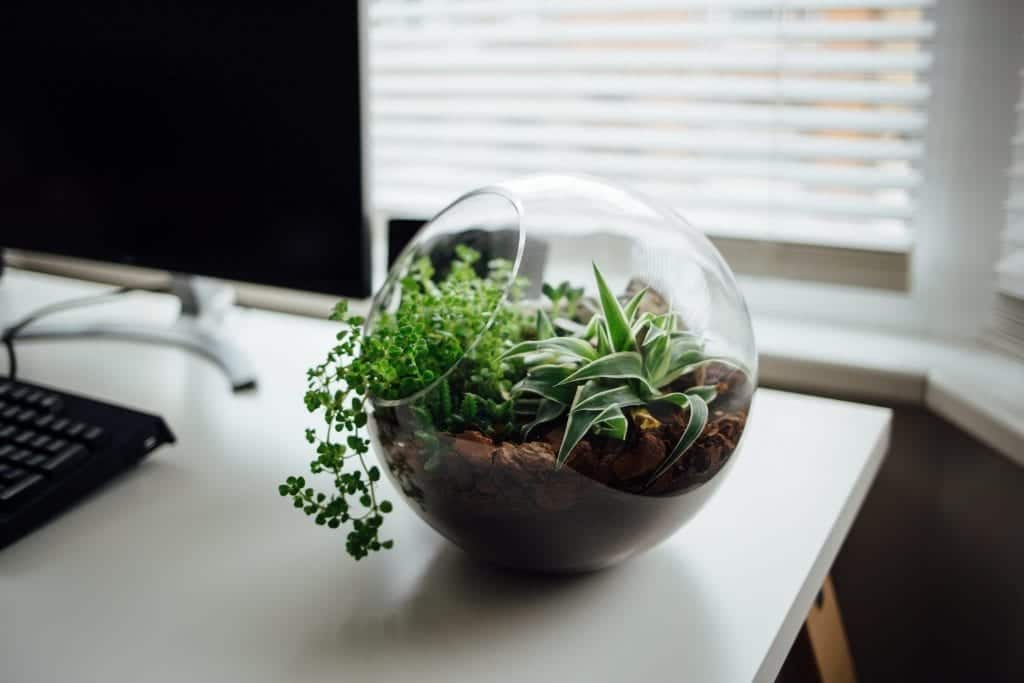 Asking about the best substrate for a terrarium is sorta the wrong question to ask. It’s not like the container needs a specific kind of dirt – you don’t ask for the best soil for terracotta pots, do you?

How to Make Terrarium Substrate

The soil for your terrarium can be as simple or complex as you want it. As long as you don’t plan to stock it with very particular plants, like orchids, you can probably even just use the dirt from outside.

If you want to mix up some terrarium substrate to keep on hand, try a recipe like this:

Put them in the terrarium in that order, though you may want to plant stuff before you put on a top dressing.

List of Common Terrarium Substrate Ingredients (and their uses)

If there’s one thing I’m trying to get across in this article, it’s that there is no single correct way. It mostly depends on the plants you have and how much maintenance you want to perform on the terrarium. Here is a list of terrarium soils and accouterments you might consider adding:

If you don’t want to go through the trouble of mixing up dirt and creating all kinds of layers, I’d recommend getting a premade mix of terrarium substrate.

They’re a little annoying to find, since a search for “terrarium substrate” usually turns up results catered towards reptiles or amphibians. If you are interested in growing primarily plants, it’s hard to tell whether or not the product is still a good option.

The best general-purpose, premade terrarium mix is from Josh’s Frogs, one of the foremost authorities on bioactive terrariums and vivariums. It’s formulated to hold water without becoming sopping wet, so it’s a good fit for most plants. 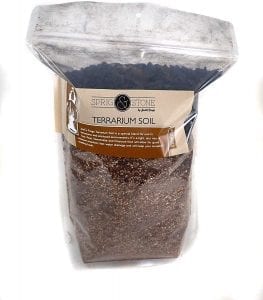 Click on the picture to check it out on Amazon!

That’s about all there is to say for terrarium soils and substrates. Any questions I didn’t get to? Ask in the comments!