Balancing Chemicals in Your Jarrarium

Much like aquariums, there are several chemicals that you will want to monitor regularly. Ideally, in an entirely self-sustaining ecosystem, you would never have to monitor or adjust the levels of these chemicals. While you probably won’t achieve that level of sustainability, adjusting chemicals should be a rare occurrence in most jars (barring dramatic events like plant die offs). It doesn’t hurt to check though! Most chemicals are easily checked with test strips that can be purchased online or in pet stores. PETSMART also offers free water tests; simply bring in a vial of water from your jar or aquarium and they will test it in-store.

Salt should be a non-factor for most of us. As I mentioned earlier, freshwater is almost always the way to go for a jarrarium. Freshwater has no strict definition, but if your water has less than 1 part per thousand (ppt) salt it is very fresh. If you have only ever used tap water or pond water in the construction of your jar, it is not necessary to test for salt as it will be virtually absent.

This is an important one to monitor, and fortunately, one of the easiest. Remember: pH goes from 1-14 (7 is neutral), and low numbers are increasingly acidic while higher numbers are more basic (or alkaline). Less important, but you should know that pH is measured on a logarithmic scale. That means that a move from 7 to 6 indicates the water is ten times more acidic than it was before.

There are a multitude of cheap test strips will check pH quickly and accurately. Freshwater animals generally prefer neutral water (pH of 7) to slightly acidic (lower numbers, like 6.5). Saltwater creatures often prefer a more alkaline solution (higher numbers, like 8). You should strive to keep your jarrarium at a neutral 7 unless you are aware that your plants or animals require something else. Adjust pH via pH drops, dilute as necessary.

This is a big one, especially for aquaria and jarraria. Any nitrogen product (nitrates, nitrite, ammonia, ammonium, etc.) can be toxic in high quantities. They are often waste products – excreted by animals and also released by decomposing plant or animal material. Some bacteria, called denitrifying bacteria, change ammonia from the toxic form to the form of nitrogen utilized by plants. It is unlikely, however, that they will be able to process all of it in a jarrarium.

Most aquarium test strips monitor ammonia, nitrite, and nitrate. If all the levels fluctuate mildly, but stay relatively constant, your jar is cycling and healthy. If ammonia outstrips the other two, you’re in trouble. Additionally, don’t let nitrate levels reach 100 parts per million (ppm). It is already dangerous to the inhabitants of your jar at this point. Monitor the levels to find out how often you need to change water. Regular water changes will prevent nitrogen products from reaching dangerous levels.

While rarely present in quantities high enough to harm plants or animals, phosphorous and its derivatives are also a product of decomposition. Elevated levels can be a result of debris, or perhaps additives from soil you might have used in your jar. Nitrogen and phosphorous are the primary components of fertilizer. Just like fertilizer run off causes algae blooms in rivers and estuaries, it can cause an algae bloom in your jarrarium. Monitor this alongside of nitrogen, and do water changes if you notice the level changing significantly. 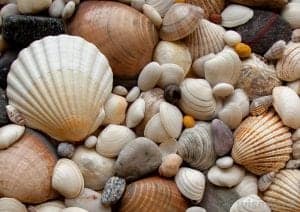 This is a chemical you might not be familiar with even if you’ve had aquariums before. Calcium carbonate (CaCO2) is an important compound used in lots of animals’ hard coverings, like the exoskeletons of insects and crustaceans. It’s also used in making snail shells! In order to keep the animal inhabitants of your jar healthy, you should ensure there is sufficient calcium carbonate. It is not a resource that is used quickly, however, so you won’t need to monitor or regularly add it. In fact, calcium carbonate makes the water more basic, so you should avoid adding it after your jar is running. You can ensure an ample supply by using a couple sea shells in your jar, or by adding a pinch of garden lime when you set it up. Both are plentiful sources of CaCO2.

Chlorine should be a non-factor in most jarrariums. Unless you decided to build one in a pool, I guess. The only other source of chlorine you might find are trace amounts from tap water. It goes without saying that chlorine is bad for aquatic animals and should be eliminated from your jar. Standard aquarium test strips will check for chlorine. To remove it, water change with neutralized water.

We’re getting close to the end! Jarrarium Maintenance.