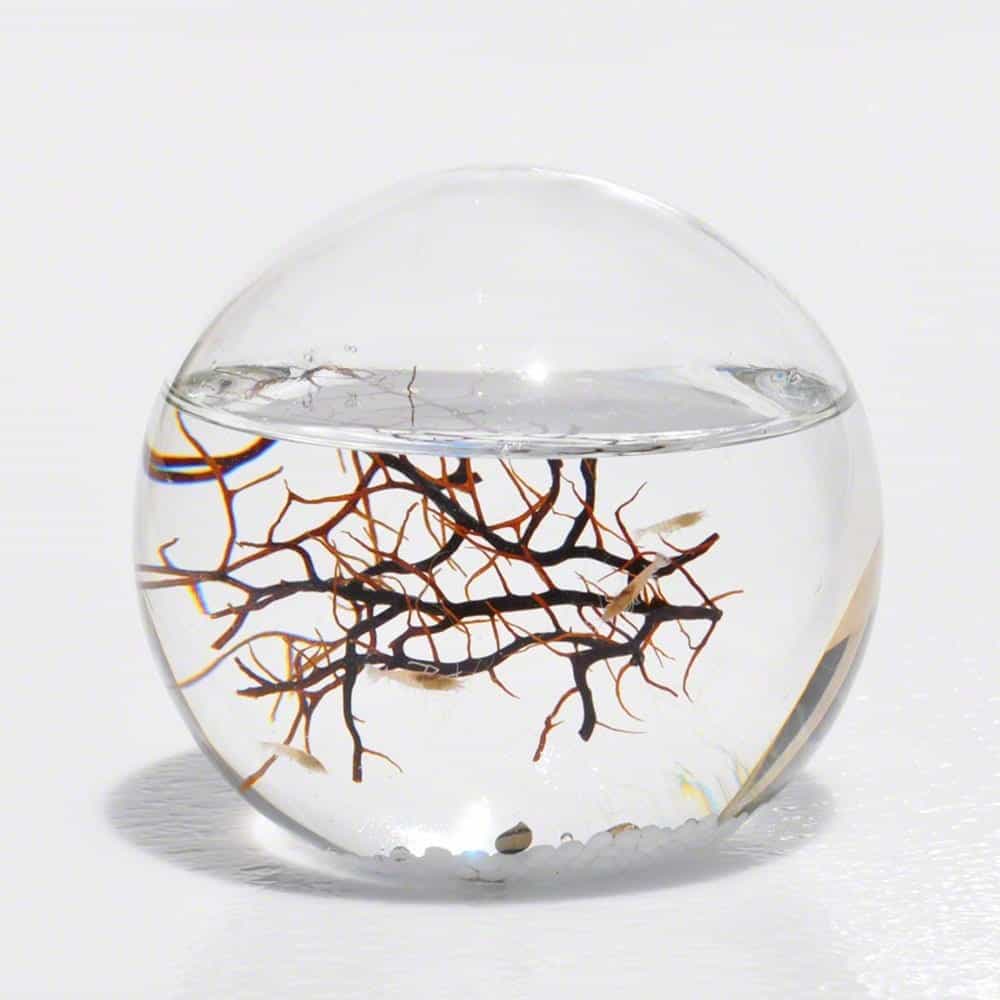 The EcoSphere is the most recognizable of ecosystem-related products. It’s the poster child for self-sustaining ecosystems in the public’s mind.

And, truthfully, it’s one of very few products that actually does meet the standards to be truly self-sustaining. It is materially-closed. The only input is energy from light and ambient temperature.

Even more impressive, the EcoSphere achieves these criteria while being a successful commercial product. Their website boasts of having sold almost a million of the little globes. It’s easy to understand why: they’re not prohibitively expensive, they require virtually no maintenance, and they are actually interesting. Anyone could toss some green, slimy algae in a ball and it would stay green for many years. Have active, macroscopic critters in the form of shrimp is what makes that EcoSphere truly unique.

That being said, there is some contention surrounding the EcoSphere – namely, the fate of the shrimp.

Halocaridina rubra, often referred to by its Hawaiian name “Opae Ula” or Red Volcano Shrimp, is an incredible little crustacean. They can tolerate the extreme conditions found around, well, volcanoes. They can survive in tide pools, which are generally harsh environments. These shrimp even live up to 20 years, despite being less than an inch long.

This makes them an excellent candidate for an EcoSphere… because it is also, unfortunately, a harsh environment. Ecosystems with a small volume are very sensitive to change, be it temperature, light, or chemical levels. Leaving your EcoSphere on a shelf with too much sun for even one day could prove lethal.

More importantly though, the product doesn’t have a reliable way to deal with shrimp waste. Although shrimp have a very low-bioload, ammonia will eventually accumulate to toxic levels. EcoSphere’s pamphlets remind us that the spheres include “microorganisms” in addition to algae and shrimp, but the simple fact is that the sphere can’t support a large enough population of denitrifying bacteria in a volume so small.

The end result is that the average life of an EcoSphere is only 2-3 years. With good care you could reasonably expect 5 years. While, personally, I think the price is more than worth it for 2-3 years of a fascinating paperweight, the real issue is the moral one.

Is it right to keep shrimp in a cage, knowing that you’re shortening their lifespan to (at best) a quarter of its potential? And you know their eventual death will be from being poisoned by their own waste?

Of course, most of these wild shrimp don’t live to 20. They are preyed upon, smashed into rocks by the tide, or trapped in a dwindling tide pool.

In my opinion, the bigger issue here is that all these Opae Ula are wild-caught. They’re incredibly hard to breed in captivity, as hobbyists could tell you, so the shrimp used in EcoSpheres are harvested from the islands of Hawaii.

Is it sustainable? I’m not sure. We’ve witnessed the perils of over-fishing many other times, though. Wild-caught stock is the seedy under-belly of the aquarium trade, and I’d rather not support it.

Apologies if this review sounds scathing – I don’t hate EcoSphere. I wouldn’t personally buy one, but I don’t think they’re evil. You could always make a jarrarium yourself (for cheaper), but not everyone wants to do that. If an EcoSphere sparks in a child a love of science, or convinces an adult to care about conservation, then its good will far outweigh any harm.