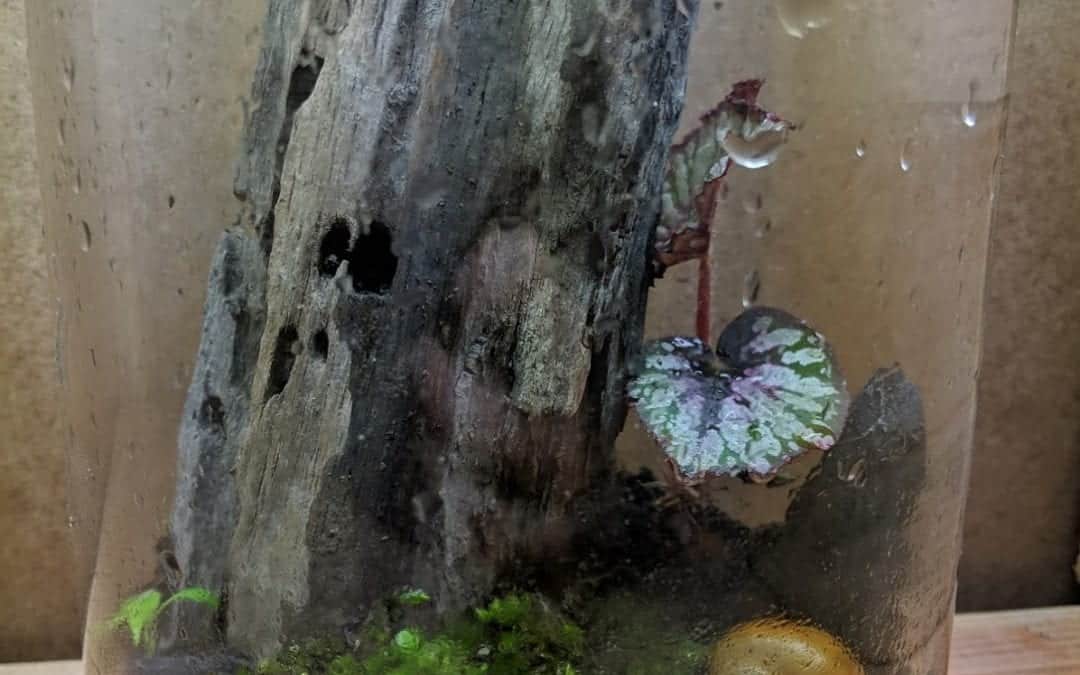 Before you start building or even planning your terrarium, you need to make the most important decision of the whole process.

Your choice will have far-reaching implications (at least as far as your terrarium is concerned). It dictates the type and number of plants and animals you can include. It will impact the aesthetics and the longevity of the system. It’s the difference between regular maintenance and no maintenance at all!

What Constitutes a Sealed Terrarium?

Just so we’re on the same page, let’s talk about what makes a terrarium sealed.

We touched on it in the last chapter (Can a terrarium be self sustaining?), but it bears repeating. A sealed terrarium has no exchange of matter with the outside. It has two important corollaries:

Of course, like everything in life, it’s not quite black and white. Since terrariums can be made in lots of containers, there are varying degrees of “sealedness”. A pickle jar with the lid screwed on tight is about as sealed as you can get. Those huge terrariums made in fish tanks are very difficult to completely seal (and you probably wouldn’t want to anyway).

Theoretically, you could seal anything with enough ingenuity (and silicone), but it’s definitely the case that some containers are better suited towards being sealed completely or not at all.

It’s also worth mentioning that there’s a bit of an in-between method. It’s not uncommon to create a sealed terrarium which is occasionally opened for purposes of watering, maintenance, and general refreshing. 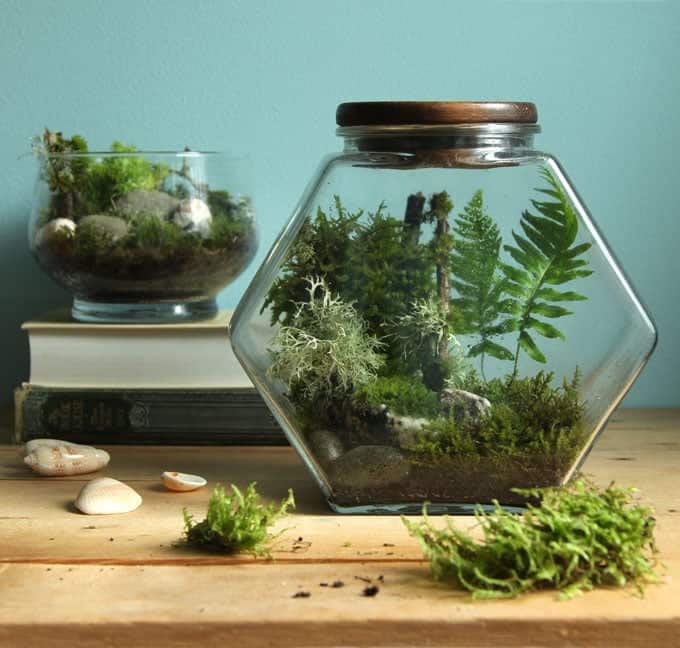 And, actually, that method is a great compromise. It alleviates a lot of the complexity and difficulty of creating a sealed terrarium, but generally requires way less work to upkeep than an open terrarium.

This third category doesn’t really qualify as either sealed or unsealed. If it’s ever opened, even once, you break the seal (literally) and it’s no longer truly self-sustaining. As far as science is concerned, at least. You wouldn’t be able to use that terrarium as data because it was compromised.

Of course, that’s a moderately pretentious viewpoint. Few of the people reading this are aiming to use their jar of plants and bugs as a data point for their research. Ultimately, you should use whichever strategy brings you the most satisfaction.

Pros and Cons of Sealed and Unsealed Terrariums

Let’s list the advantages and disadvantages of each type of terrarium.

That last one might not even be a con. Maybe I’m the only one who thinks that way.

The Difference Between Sealed and Unsealed Terrariums 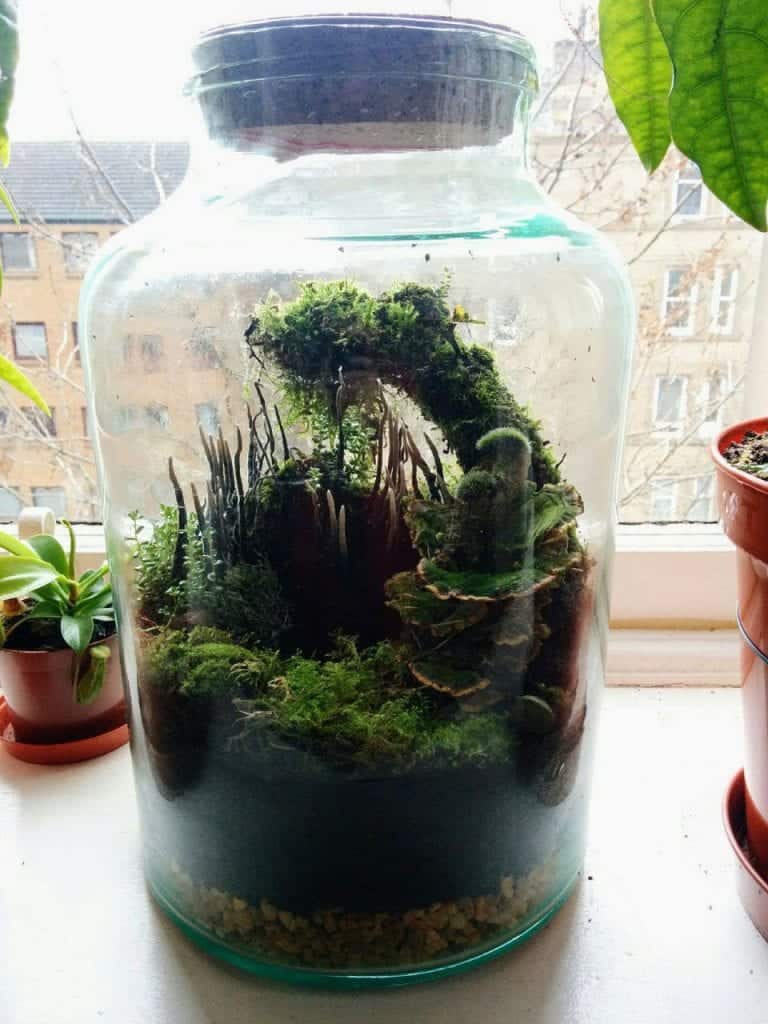 An unsealed terrarium is basically a potted plant, or rather, a community of potted plants. You generally keep them around for aesthetics; they can be absolutely gorgeous. There are many ways to add your individual flair –  lots of people put in crystals or statuettes or gnomes.

Unsealed terrariums come with many of the same benefits and drawbacks of potted plants, too. You have to devote time to taking care of them every 1-3 days. Tropical plants, like those usually used in terrariums, are generally a bit more needy in this way.

Perhaps the biggest drawback is that you can’t really put any animals in an unsealed terrarium. Or, you could, but then it would probably be classified as a vivarium or something instead. What’s the difference between a bio-active lizard vivarium and an unsealed terrarium? Just the lizard, really.

Self sustaining terrariums rely on a robust population of insects and microorganisms, just the kinds of things you don’t want escaping into your home. You might be able to keep some springtails in an open terrarium, but not much else. It could be healthy, sure, but not really an ecosystem in a jar.

Remember how we defined ecosystems? It’s not just the living bits, the plants and the animals, that make up an ecosystem. It’s everything. It’s the soil, the air, the water, and the rocks and minerals too.

Only when all of these components are forced to interact with one another, as they are in a closed system like a sealed jar, do they begin to function as a discrete ecosystem. Potted plants aren’t an ecosystem in and of themselves, they’re a part of the larger system around them. A closed terrarium relies on just itself.

Not to mention you get to keep cool animals without worrying about them getting out. Sure, it’s mostly bugs and worms and whatever, but they’re pretty fascinating in their own right. We hardly ever get to seem them going about their daily life, especially those that hang out underground.

If your goal is to have a Pinterest-worthy terrarium, going with a sealed system probably isn’t the best option. It’ll doubtless get ugly. Life gets ugly sometimes. It will, however, be a fully-autonomous, independent, and unique world all its own.

That’s the true draw of the sealed terrarium (and the inspiration for this whole website!).  You get to observe on a micro-scale the same processes that occur on a global scale every day.  You’re meant to be a passive observer. These terrariums are about satisfying intellectual curiosity and perhaps challenging your intuition of the components of stable ecosystems.

It’s up to you as a creator, but for the purposes of this site, pretty much all the educational material and guides will be working towards creating a sealed terrarium. After all, you’re on SelfSustainingEcosystem.com!

That perspective can be considered a “restricted” view on terrariums. Everything we’ll discuss will be applicable to unsealed (or occasionally unsealed) terrariums too, with slight tweaks, so it’s useful material regardless.

There are no terrarium police enforcing the rules and regulations on sealed vs unsealed. Do what you want, try new stuff, learn along the way. Tell us what you discover!